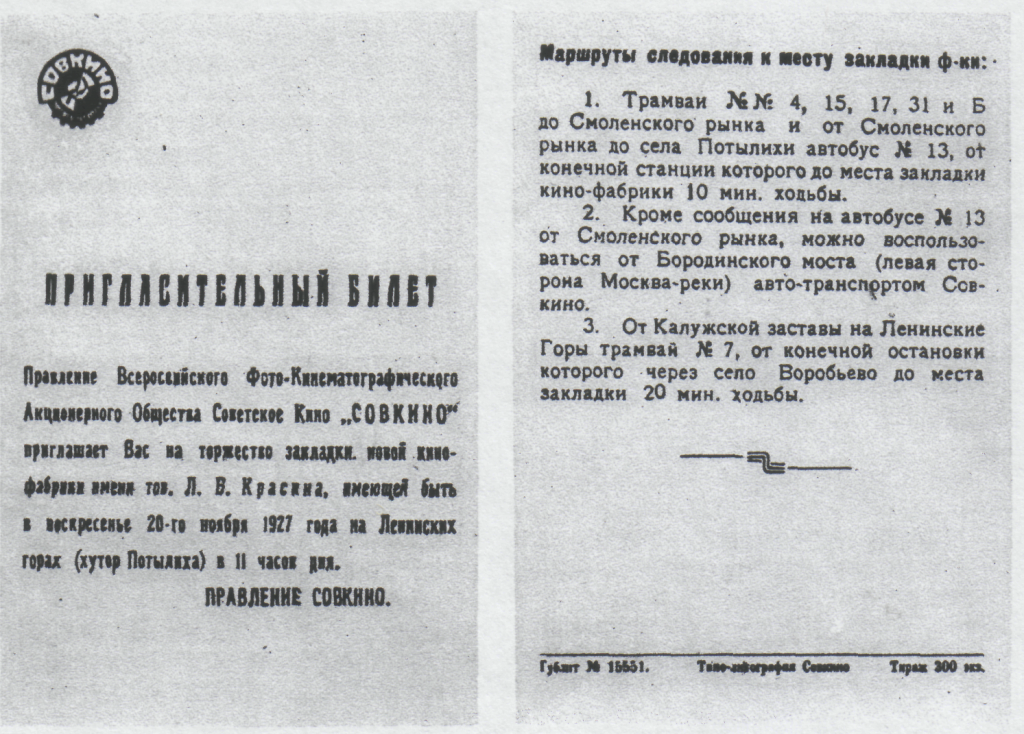 Experts often talk about the contribution of several generations of the Mosfilm employees into the development of Russian and foreign cinema (studio's collection of films includes about 2500 films) and with all this talking we often forget how this unique cinema town in the middle of the Moscow was built. Mosfilm buildings on the Vorobyovy Gory constitute a unique complex that allows us to see all the main stages of the development of Russian architecture.

The Mosfilm history started on January 30, 1924 - the day, when the film "Na Krylyakh Vvys'" (On the wings into the sky, directed by Boris Mikhin) was released. At that time the film studio was located on Zhitnaya street. After the release of such films, as "Stachka" (Strike) and "Bronenosets Patyomkin" (Battleship Potemkin) the popularity of the cinema increased, and respectively increased the number of films being made. Zhitnaya street did not have enough facilities and equipment for this. Sometimes one studio was used for several films simultaneously, that's why in 1927 the decision was made to build a new large complex that would embrace all the studios and workshops.

The foundation for a new film factory was laid on November 20, 1927 on the Lenin Hills. The architects and the engineers of Sovkino developed the project. The first phase of the building of the compound that the newspapers immediately branded as the giant of the Soviet film industry began on February 9, 1931. In 1932 the first film shoots took place there.

One of the first studio buildings on the Sparrow hills - the main building (1930) - was built in the style of constructivism. The constructivist architectors focused on functionality and "geometry" of the structures. The main building, for instance, was supposed to look like a plane. Its central part was conceived as a cockpit (the director's office, by the way, is in it). The second and third parts were made in the form of plane's wings, the first and fourth constituted the fuselage. In its tail section, the actor rooms and editing department were situated.

For the sake of functionality, the rooms were built so that their walls could be moved if necessary. The studio was built in the era of silent films when the film makers did not need to record synchronous sounds, so the parts of the main building were connected to each other with light construction structures that were not capable of providing good soundproofing. But they could be easily dismantled if there was a necessity to expand the valuable shooting space. One of the studios had the outside wall that could be moved so that a panoramic view could be provided. With the advent of sound films, those specificities of the construction became a big problem. For the sake of soundproofing, the decision was made to rebuild the building. This process was completed only in postwar years.

In those years constructivism was replaced by the traditional classicism. The typical example is the building of the old recording studio decorated with the classical pilasters and column caps. The project was developed in 1935 by the architect A.Modestov and the production engineer V.Batashov in the Goskinoproject.

The same year the building process began, but it was finished only in 1954 by the N.Trankvilitski - the chief architect who headed the project "Big Mosfilm" in those years.

Initially, the project was developed in 1948 by the Institute for the design of film companies and cinemas GIPROKINO (chief architect - G.Lavrov). Unfortunately, this ambitious project was not finished. The most typical buildings of that time are the second and third units. They are placed along the Mosfilm streets; their facades face the city highway. According to the plan, a garden square supposed to be in front of those buildings. On the territory of the studio, the squares and the fountains were intended.

Another vivid example of the Stalin's Architecture is the front entrance to the studio from the side of the Sparrow hills and the cast-iron fence surrounding the whole Mosfilm territory.

The construction of the studio did not stop in the 1960s, but the government set the goal to increase the speed of the construction while making it cheaper, and that influenced significantly the architectural style of the decade. Architects rejected the decorative effect in favor of functionality. This was reflected in the design of the production complex, built in 1964 (architect N.Kurnysheva, chief architect of the Mosfilm expansion project - N.Trankvilitsky).

Logical next step of this process was the geometrically simple industrial style "of glass and concrete," which prevailed in the architecture of the 70s. In 1978 the construction of the department of stage and performance was completed. Its basis was the large concrete slabs.

One of the latest buildings built on the Mosfilm territory was the new recording studio. It is the classical example of the architectural style of the 80s (chief architect - N.Davydov). Remaining faithful to the strictness and the functionality the architects of those years again tried to bring the element of decorativeness.

The new recording studio building includes the Recording studio №1 - the only studio in Russia, where it is possible to record the whole symphony orchestra at once. The studio was designed by the prominent English architect Tom Hidley, the acclaimed master of the acoustic design.

The Mosfilm construction history does not end here. Soon the new buildings, the beautiful examples of the modern architecture, will arise on the territory of the film company.